Possibly to convince myself that I am not the only one thinking like I do, I have been active in several peace promoting organizations. The most recent is Servas that I joined about a year ago. It was founded in Denmark in 1949 and currently has members in over 100 countries. One activity Servas promotes is travelling to other countries and having meaningful discussions with fellow Servas members.

That’s what I do now, whenever I go travelling. Before and during my trips I try to get in contact with as many Servas members as possible. They are typically well educated, friendly people who are willing to share their time and home with me.

On my one-month stay in Chile last fall, I was so lucky that the Servas couple I was staying with was planning to travel to the south of Chile on Carretera Austral on their summer vacation in the beginning of December. They invited me to join them.

It was totally different from any of my other trips. Travelling together with local people with great social skills and a lot of good stories. They had booked accommodation long time in advance, so I did not need to spend time searching and deciding where to stay. I just booked a room next to theirs at various places where we stayed overnight. 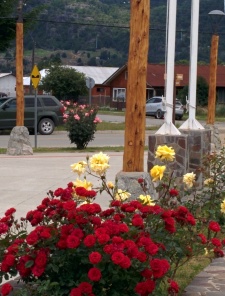 One of my reasons to choose Chile last fall was that I had met many Chilean refugees from the Pinochet regime in Stockholm in the 1970s. I mainly met them in Stockholm’s Culture house where I went to borrow books on Saturdays. Chileans and other foreigners used to hang out there. We listened to music written by Violeta Parra and Victor Jara and tried to talk with each other, mainly in bad English. What was going on in Chile was a mystery to me. The most remarkable thing I understood was that people were tortured and disappeared without leaving traces.

When travelling in Chile I hoped to meet some of those refugees who had returned to Chile after it regained democracy in the beginning of the 90s. I didn’t meet any, and nobody I met knew of anybody who would have returned. Some people I spoke with had the opinion that those who left Chile for Northern Europe stayed there because of the high standard of living and social security.

A lawyer, with whom I had a long discussion about this, claimed that many of the people who left Chile at that time were not real refugees, but poor people who wanted to create better lives for themselves in the rich northern Europe. He said there had been an agency in Valparaiso, where you could purchase a “refugee package” with false stories and documentation in order to be accepted as a refugee wherever you went.

In Chile I also meet other Servas travellers. A Swedish couple in their 70s on a 3-month trip around the world. They had just arrived from the Easter Islands and before that been to Australia. Together we visited the pre-Columbian Art Museum and the Museum of Human Rights. As experienced travellers, the Swedish couple always bring a thermos of hot water, instant coffee, sugar and milk with them. Between visiting the museums we sat on a roadside bench enjoying coffee, swapping stories and commenting on street life in Swedish.

There was an immediate connection with the Swedish couple. The same happened with two French women from Normandy. One of them was a retired librarian and the other a retired Spanish professor. They had known each other since their children were small. After retiring, they started exploring the world together. We shared a lot of stories and cooked together for our Chilean hosts.

Travelling with Servas is a great way of getting insight into a foreign society. You meet people who are happy to share with you their experiences and knowledge. When back at home, you can have interesting people from the whole world visiting you. I already have had a visit from the Chilean couple and await another Chilean family to come to Denmark in the summer.

Now I am thinking about traveling to Guatemala.

“Why do you want to travel to Guatemala?”, a friend of mine asked earlier this week.

“Not for any particular reason”, I answered. I could as well have closed my eyes and pointed at any random place on the world map. But why not Guatemala? It is a reasonably safe, warm and historically interesting place. I could take private Spanish lessons for 5 dollars an hour, stay at places that cost 10 dollars a night and possibly do some volunteering work or even start writing a book.

Should you want to learn more about Servas, visit this website: https://www.servas.org Check also the national Servas organization in your home country.

2 thoughts on “Birds of a feather flock together”