I got married for the first time on a rainy day in July 1 in 1983. The mayor of Lahti wedded us at his large office. Afterwards we celebrated with a dinner and dancing at a small hotel-restaurant in Mukkula. Present were our closest family and friends from Finland, Norway and Sweden.

After the wedding celebrations my husband, sister and I flew to two different places on a honeymoon: first we spent a week in New York and then a couple of weeks in Mexico. Why where we three?

It was simply because we had shared an apartment in Oslo for some time and got along well. And why would my sister not experience the same adventures as the two of us? I also had some kind of premonition that she might never get married. Therefore we never really discussed why she shouldn’t join us on the honeymoon. A more realistic question had been: Why not? 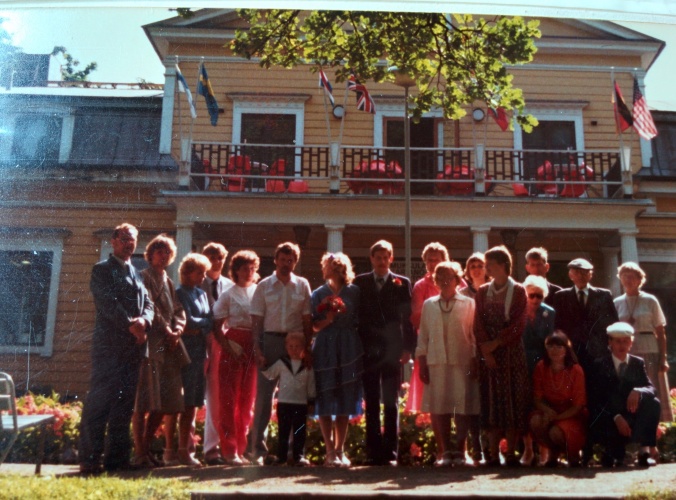 We did not invest in hiring a professional photographer…

Manhattan around 33rd street was not the place to be in 1983. We spent the first night at the YMCA and somebody was probably killed in the corridor between my sister’s and our room. Based on the cries of fear and death, we did not dare to open the door to check. The next day we were attacked by two black men in the Central Park and saw somebody else being attacked on the street on our way back from the park.

Scared, we moved the second day to a many-star hotel next to the UN-headquarters. After giving us the keys, the receptionists warned: “Don’t open the door to anybody, you have not made an appointment with in advance”. We didn’t feel safe in our hotel room, despite the four locks mounted on the door. Needless to say that after the first night’s experiences we three shared room the rest of the trip.

The third day we rented a car to get out of the terrifying big city in order to drive to see Niagara Falls. We never got that far. Instead we chose to rest at a simple roadside motel in the countryside for the rest of the week before flying to Mexico.

Mexico City was a paradise after New York even though the air was heavy with pollution, the temperature 110 degrees F and the metros were crowded. But people were friendly and looked normal.  We did not see any insane homeless people sitting on the streets and picking flees from their hair or peeing at the underground stations. Oddly enough we felt much safer than in the US.

The following two weeks we traveled long distances by public buses, visited pyramids and jungles on the Yucatan peninsula. We spent several days at my Mexican friend Ana’s home in a small town called Emiliano Zapata in Tabasco. Thanks to her we got great insight into Mexican life and experienced things ordinary tourists would not, like horseback riding on the savanna.

Since my husband and I had lived together a long time before the wedding and did not need to spend the honeymoon to learn to know each other intimately, it was definitively the right decision to invite my sister along. Now my sister and I share great memories from that trip, while that husband belongs to the past. And my sister – she never got married.