… could we have our next winter holiday on a cruise ship in the Pacific”, asked my husband when he saw me packing for my month-long trip to Colombia.

“Yes, of course”, adding jokingly, “maybe you better take a cancellation insurance to get the money back in case I don’t survive Colombia.”

Now after two weeks in Colombia and after having spent time in three big cities: Bogota (8 million inhabitants), Medellin (2.5 million) and Cartagena (1 million), I tend to believe that at least these cities are equally safe for travellers as any other where I have travelled or lived in my life.

In fact the only city where I have been attacked ever was in my hometown Lahti in the 70s. I was returning with my sister from a 3-week hitchhiking trip in Poland and we took a shortcut to the bus stop through a tiny park late in the evening. There was a group of men who took hold of our backpacks and tried to get them off our back.

“What are you doing?” I shouted scared, and tried to hit the man who was after my sister’s pack.

Suddenly all men stopped a second, and one said: “They are Finnish”. We used the surprise moment to run away to the bus stop where luckily there were other people.

Of course there are bad people almost everywhere, and it is difficult to know what places to avoid when you are new in a city. Therefore I check on the Internet what various embassies say about safety in Colombia.

Generally the embassies warn about visiting certain regions where there are guerrillas, drug traffickers and any kind of illegal activities happening. The US embassy also advises only to take planes between cities because of the risk of kidnappings and accidents. One American affiliated with the US embassy in Bogota told me they are not allowed to use local taxis, and instead use Uber – which is illegal in Colombia. Therefore the Uber drivers want you to sit on the front seat.

So far I have flown between big cities and only taken one regional bus to a minor city, Guatape. It was a well-maintained, well-trafficked road where drivers seemed to think traffic signs and speed limits are only recommendations. On the way we only saw one accident involving two motorcyclists.

I have used Uber a couple of times in Colombia and found out that it is more expensive than local taxis. The first Uber driver delivered me to the wrong hotel in the old town of Cartagena resulting in me having to walk half an hour with my carry-on luggage to the right hotel. Probably the driver did not look at his GPS and I was not alert enough to use the GPS on my phone. Anyhow, the place he delivered me to was a party hostel with a similar name as my hotel.

On the occasions when I took local yellow taxis, the drivers have also had difficulties finding the right address. In Bogota one taxi driver frightened me when after a 20-minute ride he suddenly locked all the car doors.

“Es un sector peligroso”, he responded meaning it was a dangerous part of the city.

Looking out of the car window, I could see a couple of transvestites ‘spankulating’ on the street as well as some pumped up female prostitutes. It looked strange because it was before 10 o’clock in the morning. However that driver delivered me safely to the Gold museum in the Center. That must have been the taxi where I lost my MasterCard, because I was fumbling after cash and my hands were shaking a bit.

Both in Bogota and Medellin I prefer to use public transportation. It’s a common mode of cheap transportation, and gives me some degree of control. The combination of metros and buses is especially great in Medellin. Some travellers don’t take buses and metros because these are normally packed, but I feel safe because people are extremely helpful. Whenever I feel lost, and ask for directions, I get help. 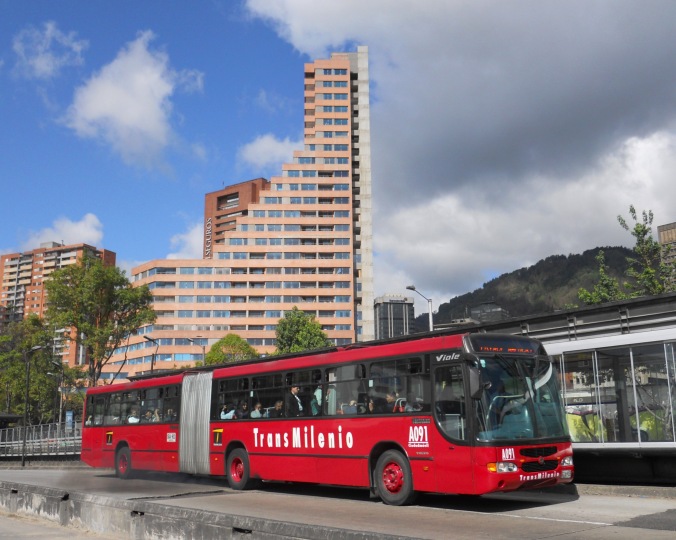 Yesterday I had carefully planned in advance a trip to the main arts museum in Medellin. I had even written instructions on a piece of paper, because during the last few days my GPS has at critical moments delivered the message: “no signal found”.  After following my instructions, walking 20 minutes, taking a bus, then a metro I arrived to a station from where I was to walk 10 minutes to the museum. However, I did not know which exit to take from the station and asked a couple of young girls. They did not know but one of them went to the ticket office to ask. She came back and told the ticket office person did not know the area.

Then a middle-aged woman who had been standing close by joined us and said I should take one metro, change to another and then walk five minutes.

“That does not make sense”, I said in bad Spanish, pointing at my GPS, which showed a short stipulated way to the museum.

The woman looked at the GPS and said briefly “Es un sector peligroso”. She said determined I should follow her. We took a metro to the next station, where she showed me the next metro I should take. And after 10 minutes I arrived safely at the museum.

GPS is usually a fantastic tool that I use a lot to find my way, but it has its limitations. It does not know where it is safe to walk or travel. Only local people do. Therefore making contact with ordinary people who live their everyday lives in places you are visiting is the best way of staying safe.